Lawd, with friends like Faye Resnick, who needs enemies?  Y’all know I am loving this series on FX, actin’ like I wasn’t there for the drama as it unfolded in real-life.  Like I wasn’t tuned in to CNN erry night for the breakdown of the court goings-on for that day…all the way up to OJ tryin’ on that glove with them big arse crooked arthritic hands and fangahs….and Johnny Cochran rhyming “if it doesn’t fit…you must acquit”.  Bay Bay…that was the FIRST foray into a reality show that any of us had ever seen.  This trial of the century had it all…murder, mayhem, debauchery, lies, foke on the run in white Broncos, threatened suicide, salacious pictures and foke past being brought out into the light.

We didn’t really know Nicole Simpson.  We thought of her as OJ’s ex-wife.  Black women more specifically thought of her as somebody who had stolen one of “our” men from his first Black wife.  But we were still able to view Nicole as a real victim, and her friend Ron Goldman as the goodhearted waiter who was happened to show up at the wrong place at the wrong time.

That is until Faye Resnick, Nicole Simpson’s BFF, showed up on the scene with a hastily written book (co-written with somebody from the National Enquirer) to capitalize off her friend’s murder.  I’ve always wondered what would have happened if Faye had just kept her trap shut until AFTER the trial.  Maybe it wouldn’t have made a difference, but it surely didn’t help.  You know “we” are good for putting victims on trial when it should be about the criminals that murdered, raped, abused, them.  And that is what happened.  Faye Resnick told us her friend was a loose woman who loved sex and loved pushin’ OJ’s buttons.  At the end of the day, that shouldn’t have mattered.  She didn’t deserve to get pulverized by the man who at one point vowed to love, honor, and protect her.  She sure as hell didn’t deserve to be brutally killed…to the point that she was pretty much decapitated….on the front steps of her condo while her children were upstairs sleeping.

Back then, I don’t think I knew about all the blood and DNA evidence.  DNA was still kinda new.  Plus Black foke were fresh off the L.A. riots.  We didn’t trust the LA police because we saw them beat that Black man down (Rodney King), using all kinds of racial slurs.  And now you wanted us to believe that the ringleader in that debacle, Mark Furman, could be believed in the OJ case/trial.  So yeah, we wanted to believe that if the LA cops were capable of beating that man up on video and getting off…then they were damn sho’ capable of framin’ a Black man, planting evidence, and leavin’ stray gloves lying around.  Mark Furman didn’t help by perjuring himself and then invoking his Fifth Amendment rights.  Chile please.

OJ did errythane but leave his Heisman Trophy and car keys at the scene of that crime, but he still got off because Black people on that jury felt that “they” (the man, the establishment, the LA cops) owed us one.  OJ got off because Marcia Clark and Chris Darden weren’t as smart as the Dream Team.  Johnny Cochran knew how to play their game, and beat them at it.  And in the process, people forgot about Nicole Simpson because she wasn’t the “right kind” of victim, even according to her bestie.

I guess if there’s any comfort for the Brown and Goldman families it’s that OJ is serving time in prison for something even if it isn’t for savagely murdering two people that balmy night in June. 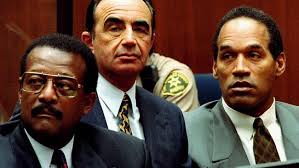