Cynthia made Peter cry tonight, Y’all.  I felt like 1/16th of compassion for his ol’ arse for bout 15 seconds…and then I remember how he was all up on that woman at that sports bar with his hands round her neck and grazin’ her chest and rolled my eyes.  He deserved what he got from Cynthia tonight because he took her for granted.  All out there in them people’s public eye gallavantin’ and canoodlin’ when errybody and they grandmama got a cellphone with a camera and video capabilities.  In the words of that ol’ sage, Fred Sanford, Big Dummy! Still I don’t want them to break up because I feel like they really love each other.  She was down with Peter when erry business he undertook had roots on it and failed.  There’s something to be said for that.

Plus Leon (LAWD..that thane still fine!) told her to stay and fight for her marriage.  Of course, that was after he told errybody that she ain’t neva been able to keep a man.  Or be kept I guess.  I don’t know how she let that fine arse Leon go.  Good to see they can be friends, cuz Bay Bay, I act like all my ex-boyfriends are deceased, cuz they arses is dead to me.  But that’s probably because unlike Leon, I’m an ol’ petty beetch.

Phaedra took Porsha to get a colonic on national tv.  I didn’t really care to see all that honestly.  They could have turned off the camera, gone in and talked about it later in the confessional.  Plus, Porsha was on that table a long damn time.  I guess when you got real big booty, it takes longer to clean it all out.  I ain’t bragging, but I would prolly be there a long time too.

I am really tired of hearin’ bout that ol’ motorbike that Apollo got in Kandi nem garage.  They need to either sell it (so they can use the proceeds to pay Todd), give it to Phaedra (so she can sell it and pay her kids’ tuition) or give it to the government since they suin’ Apollo for reparations.  I’m thinking since they said on national tv that he got assets in they garage, they won’t have to worry bout it much longer.  You know he owe errybody millions of dollars in restitution so agents will be snatchin’ that bike in short order.

Kenya had a kick off party for her natural hair care line, and that thane musta been hotter than fish grease cuz errybody was fannin’.  And when that many people fannin’ in they good clothes at your event, it cain’t be good.  How is she even s’pose to twirl among the city’s elite when her clothes are sticking to her.  I don’t like the shade they threw at Kenya though because it wasn’t her fault that venue forgot to turn on the air.  The only person that was justified in saying something was Kandi because all that heat coulda sent her into early labor.  Glad she got outta there.

Got to see Kim Fields out with the ladies tonight.  I hope they don’t turn up on her too much but I feel like it’s coming.  I am also still praying over her marriage because Andy and Bravo nem be the death of relationships.  Ask Peter Thomas.

Oh, and Kenya threw some funny shade tonight at Sheree talmbout havin’ that lady a rent party like they did on Good Times.  I tweeted that I ain’t wanna see it if they ain’t have Michael Evans sangin’ “When Your Young…And In Love”and got retweeted.  Then I couldn’t get that song outta my head.  Because y’all know Michael Evans was FOREVER sangin’.  I always wondered why he didn’t just go sing at Sears or something and use that to help get his family outta the ghetto.  I was never REALLY sold on him becoming an attorney anyway. 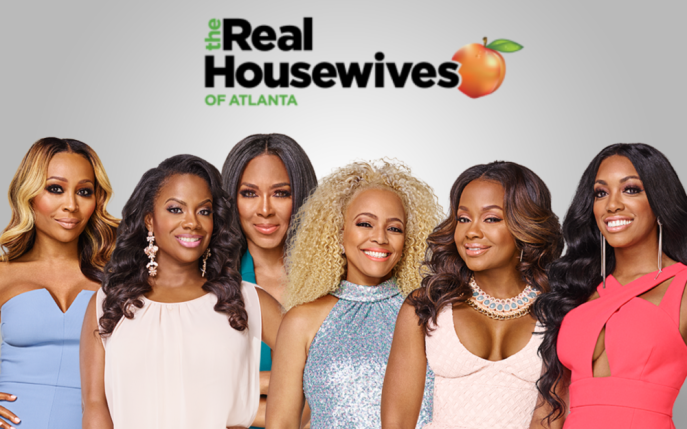