I almost didn’t watch WWHL.  I had convinced myself I was gon’ watch a Lifetime movie.  But then I looked up and it was almost 8:15 and I ain’t have no idea what Josie Bissett (the actress from Melrose Place) nem was doing, so I changed the channel back to Andy nem.

Kandi Burruss Tucker (RHOA), lookin’ angelic and glowy in white, and Vivica Fox, looking like A. Fox. was stunning in blue.  I knew I was in for some good girlfriend kee keeing and whatnot.  I had no idea that Vivica came to drop some tea so sweet, I almost got diabetes.

It started off innocently enough…Andy asked about some comments 50 Cents (Vivica Fox’s ex) ALLEGEDLY made about Empire’s ratings falling off because of that “gay stuff”.  I had to put ALLEGEDLY in cuz y’all know 50 don’t play on them people’s Innanets.  Me and my baby would come up missin’ behind 50 Cents.  And we know he “Petty” Jackson so he would definitely clap back.

Vivica was like “that’s the pot calling the kettle back…” Bay Bay…my face mirrored Andy’s. Y’all know Andy LOVES a good shadefest, so he followed right on up with ‘whatever do you mean by that Vivica…are you sayin’ Fitty Cents is “fam’ly”‘  Vivica was like ‘I don’t know…but the people who protest the loudest about something…..”  She went on “I’m just saying…there was a VIBE magazine cover where he posed with Soulja Boy and it looked like a booty snatching sichiation…”  And y’all know Vivica is like that good hood girlfriend that done made it and came up but still ain’t lost her hood tendencies or roots, so she had all the facial expressions and mannerisms that went with errythane she was saying, which made it even funnier.

And you know what happened…I, along with the rest of the viewing public hit up the ‘people’s Encyclopedia’, i.e. GOOGLE, for that magazine cover.  It was XXL, and I think it was a 2010 issue.  It had 50 and Soulja on the front.  50 had on a mask so his face was covered, standin’ slightly behind Soulja, and 50’s arm was slung over him.  Soulja ain’t have no shirt on, his pants was hangin’ down low up under his drawls, and he was grippin’ his jewels.  Bay Bay, I HOLLERED.  And tweeted that photo right on to Andy and Kandi (they both asked to see it).

And so it began.  50, WWHL, and Vivica Fox were TRENDING worldwide.  It got so bad, 50’s publicist, who shoulda been sleep and off the clock, had to call in to Andy and say 50 neva said that.  She ain’t say what Vivica said was lies tho’.  Foke started drankin’ 24 hour energy dranks tryna to stay up to see 50 clap back.  I had to search for my Instagram password so I could monitor 50’s IG.  Soulja Boy clapped back, but it was weak and a failure pretty much.  You cain’t call Miss Vivica Fox’s ‘washed up’ when she is a LEGEND, and you done had one hit song that foke know and only because a dance went with it.  Keep yo’ mouth closed Soulja, grown foke is talkin’, and continue to hold your jewels and trick off every week on Love and Hip Hop Hollywood.

And so it began with the funny memes and my Twitter timeline bein’ LIT all night.  50 finally clapped back.  I cain’t say it was epic because it was messy as hayle.  You don’t bring up what somebody said about somebody else when you Innanet beefing BUT we know 50 doesn’t eva play fair when it comes to that.  He brings a damn sword and a rifle to every knife fight.  The pic he posted of Vivica was a mess though but errybody has an off day and less than stellar plastic surgery on a discount sometimes.

Here’s hopin’ nobody gets hurt, goes to jail, or ends up missing in the Vivica/50 WAR.  Oh, and here’s the pic, because I’m messy as hayle.  You be the judge.  Gay or nah? 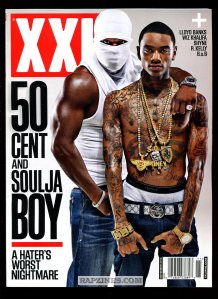