That RHOA premiere came in like a lion!  Honey…that thane had it all – debauchery, deception, infidelity, envy, shenanigans, and most of all SHADE.  I knew that Kenya Mo’ was the Queen of the USA, College Park and Zamunda, but after last night, I crown thee QUEEN OF SHADE!  That thane started shadin’ foke as soon as them folks put that camera on her and mic’d her up.

Kenya done bought an ol’ dungeon that she plans to turn into a house.  Now, I could see a little bit of vision, but I’m with Cynthia – I ain’t gon’ visit that place at night.  That thane was damn near a haunted house it was so raggely – wires hangin’ every where, no windows, no doors – looking like a damn prison block.  I guess.  The streets IS saying it’s a good investment.  I heard it’s at the bottom of a steep drop-off so she betta have a back up plan and flood insurance if it rain.

Cynthia was back and this time, she was standing up for herself.  We’ve all seent the video of her husband in his Charlotte sports bar feelin’ up a woman and all up in her ear.  I ain’t sayin’ he was cheating, but he damn sure felt her neck up like Ray Charles used to feel them women’s wrists in that movie.  And his hand sure did graze that lady’s boobs…uncomfortably.  I don’t condone violence, but if Cynthia had socked Uncle Ben in his jaw or doused him with a pot of hot rice…I’da understood.

Mallory (Cynt’s sister) was all up in too, cuz you she don’t like that Peter, Honey.  Now folks see what Mal and her mama nem was talmbout when they hid that marriage license.  Cynthia confided in Mal that she is turned off when Peter take his clothes off.  Ouch.  Bay Bay, I screamed when she tried to clean it up by saying she is attracted to Peter’s mind.  Um, okay Cynthia.  That works when you dating somebody but don’t hardly when you married.

Cynthia done launched yet another company since they say 2 people workin’ at the Bailey agency.  I have to tell the truth…I do like her lil eyewear or whateva.  She looked absolutely stunning at her launch party.

And then, the doors of the church fell open and in walked SHEREE WHITFIELD!  Yasss!  Now y’all know I cut for and mess with some Sheree.  She was my FIRST famous FB friend, and the first to retweet me when I joined Twitter last year.  She can do NO wrong in my eyes!  She stepped up in that thane lookin’ like a bag of COINS!  Kenya (my other fave) had already shaded her bad behind the House of Sheree, talmbout the neighbors say it’s an eyesore and whatnot (Kenya’s House of Horrors is 500 feet from Sheree’s house) and it’s unfinished after all these years.  She immediately went in on Sheree in front of the girls.  I’m talmbout I don’t event think Sheree had said hello to errybody.

And so it began…Sheree clapped back and said ‘unless somebody has BUILT a house, they cain’t say sheeit to me but keep renting beetch’ – it was reminiscent of “who gon’ check me Boo?”  And then she told Kenya her house was a in ditch.  Bay Bay, she laid me LOW behind that you hear me?  It got so heated, Marlo (back and looking awesome) was speechless and Andy nem at Bravo threw a “to be continued” thane up on the screen.

Congrats Kandi on your baby…Phaedra you need to let that man see them kids….Mal you was dead wrong for tellin’ the group what Cynthia said bout Peter…Peter you was dead wrong for clapping back on Kenya and calling her outta her name…welcome back Portia (something seems off with yo’ Tenderoni)….Tootie we waiting on you…and NeNe WHO? 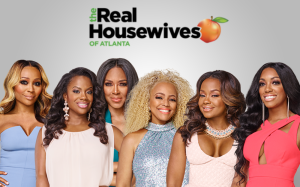