I couldn’t even come up with a snazzy name with errythane that went on with Empire tonight. Tonight, Lucious was happy to be outta jail but couldn’t go to Empire lest he be arrested.  That DA was so busy followin’ Lucious around waitin’ for him to slip up and talmbout Vernon bein’ in witness protection that she ain’t realize her Vernon BEEN GONE on to glo-ray.

The feds busted up into Empire while yo’ boy Jamal was harmonizin’  That thane sho’ can sang.  The feds didn’t stop at Empire..they also busted up in Lyon Dynasty (Cookie’s strugglin’ label).  For what I don’t know when it’s been in business like 12 days.  I’m sure they didn’t find anythane but a few empty boxes and a couple staplers.

Anika was busy tryna to get back in with Cookie, and Andre was busy beggin’ his daddy to let him back into Empire.  You know Lucious an’t feelin’ him because he kept havin’ those flashbacks of his mama (played brilliantly by Kelly Rowland) being “crazy”.  Andre told him he was gon’ have a grandchile, and Lucious pretty much told him to get outta his face.  I feel so bad for Andre.  That thane tryna find GOD, looking for deals for Empire and begging his daddy just tryna get back in to Empire.  Damn Lucious…take that boy back!

Hakeem and Jamal were still at each other’s throats, and Hakeem won for a minute when he actually slit Jamal’s throat in a  picture.  An ol’ wet headed photog had put it together and also seemed to be sweet on ol’ Jamal, making Jamal’s man a little salty.  I’m beggin’ the writers of Empire not to let Jamal sleep with that man.  He ain’t cute or built enough. On a video set that looked like the one in California Love (Dre and Pac), Hakeem and Jamal got ta fightin’ with Hakeem bout to hit his brother all bout the face and ears with a bat.  Luckily that ain’t happen.

Lucious did some underhanded sheeit by buying up all the radio stations (where are the anti-trust foke when you need ’em) and stealin’ Hakeem’s artist and newest thot, essentially killin’ Lyon Dynasty.  Cookie is not to be played with tho’ and when she got picked up on a trumped up charge (that her assistant Portia really should have gotten and thrown back in the slammer, she broke under that PTSD pressure.  She got the DA to agree to kill the radio station deal while she investigates Lucious for the murder of Bunky.  All while giving us MJ realness in a red leather jacket.  Looking like an extra from “Beat It”.

Meanwhile, Andre was still lookin’ for something to get him back into his dad’s good graces and Empire.  Said GOD sent him a Tweet that said go out there and dig up Vernon, but GOD musta forgot to tell him where Vernon was cuz Andre and his wife couldn’t find him after diggin’ for a minute.  Lucious had put a trackin’ device on Andre and showed up at the dig site with that ol’ sleazy attorney.  I swear that thane got his law degree and license from ICDC College where Romeo Miller is the president.

The attorney had a corpse locating device and they all dug up Vernon.  Bay bay that lil white lady Dre married is ride or die for real.  They were dressed like Bonnie and Clyde – I lived for their grave diggin’ outfits.  They finally dug up Vernon’s body, and Dre said some nice final words over him.  You know he a lowkey deacon in that new church he joined.  Lucious asked for alone time with Vernon and then called that thane a snitch and cussed him out.  How you do ALL THAT to a dead body?

And in the final scene, the DA was headed out and on her phone.  She got in her car and turned to the passenger seat and saw Vernon’s dead body sittin’ there like “what’s good?”  Bay Bay…I screamed.  And I’m STILL mad that Vernon been missin’ since last season and ain’t nobody filed a missin’ person report.  The Empire Writers want me to believe Vernon an only chile with no parents, no cousins, not even a woman that woulda been lookin’ for him?  Um okay.  Well at least now they can funeralize him properly since he been found.  Next week, Empire gon’ take us to church.  Now that Dre done buried Vernon, dug him back up again and sat him in that lady’s car, he gon’ find JESUS. 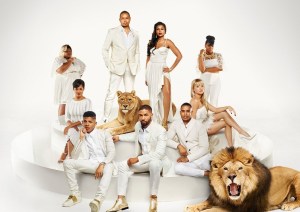