You know by the time I get to this recap, I be sleepy and tired plus I don’t be remembering sheeit.  I need to work on learning everybody’s name but damn…it’s so many foke!  Errybody and they mama, litrally, is either a student or an associate or a former screw buddy of Annalise’s.

Annalise had to take the stand tonight at the pre-trial hearing for her ex-boyfriend Nate.  You know they still sayin’ Nate killed Annalise’s husband, even though we all know that ain’t true.  Nate might murdered Annalise’s Hello Kitty but he ain’t kilt nobody.

Annalise was hostile as hayle on the stand.  Objectin’ and calling stuff hearsay when she shoulda been testifyin’.  Of course, she threw Nate under the bus when she said she thought he killed her husband.  Then she went completely off on the lil prosecutin’ attorney.  If I’da been in the courtroom, I woulda rubbed that lady’s back in a circle and said “Woo woo woo” cuz Annalise let that thane have it.  The prosecuting attorney pretty much put Annalise on trial which would prove to be a huge mistake.  The judge let Nate go…and told the state to start over.

Annalise’s girlfriend from Harvard went for her jugular when she had to cross-examine. She knew Annalise would be hot, so she went over there wearin’ sexy pannies and lingerie and such under her suit.  You know Annalise gets it in, so soon them thanes was gropin’ each other and kissin’ like Celie and Shug Avery.  “Miss Celie, you ain’t neva made love…Nawl…cuz nobody lub me..”  Them thanes fell into bed together and they 5 minute sex scene lasted about 4 1/2 minutes too long.

In the background, Wes did some mo’ stupid sheeit…all the other foke did stupid sheeit…and somehow the prosecuting attorney mentioned earlier ended up dead and Annalise ended up shot up all around the abdomen and torso.  It was clear she was dying, and of course, the students are attracted to dying and dead bodies like Donald Trump is attracted to blondes so they were standin’ over her tryna figga out what to do.

They ended up doing what they do best…runnin’.  I would offer more here but they turned all the lights off on the set and it was hard to see.

I guess it’s for the best, since I’m tired and sleepy.  I wonder who shot Annalise just like I wondered who shot JR back in the day…. 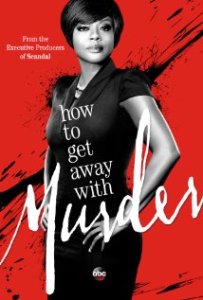