A Chicago boy unskilled in the ways of the 1950s South was hanging out with some other kids, when he went into the neighborhood store, allegedly whistled at a white woman and asked her for a date.  Two days later, two white men with flashlights and guns entered the house of his great uncle (where he was staying) and forced him to come with them.  They beat the young boy mercilessly in a barn….his cries piercing the early morning sky.

Then they loaded him back onto the truck they kidnapped him in, drove him to the banks of the Tallahatchie River, forced him to get undressed and shot him in the head.  Not done yet, they tied a 75 lb gin fan to his neck and tossed him in the river.  And that is where Emmett Till’s life ended…at the same time it would serve as a catalyst for the Civil Rights Movement.

Emmett’s mother would later faint at the site of her 14 year old son’s coffin when it arrived by train.  She made them open up that coffin, the stench of death and murder almost unbearable.  And when she saw what they did to her son – his right eye was gouged out and laying on his cheek, his nose was chopped like a meat cleaver had been taken to it, and there was a hole clean through his head – she wept.  And then she made the decision to let the WORLD see that image.  What those murderers who hated Black people had done to her son.

Black lives didn’t matter much then, and recent events have shown us they don’t seem to matter much now.  We only need to look to the Trayvon Martins, the Michael Browns, the Eric Garners, the Christian Taylors, the Sandra Blands, and the Freddie Grays of our time for that confirmation.  Even IF you are disrespectful to the police or you wear a hoody or you jump on top of a car, you don’t deserve an AUTOMATIC death sentence, just like Emmett Till did not deserve to be executed for allegedly whistling at that white woman in 1955.

Sixty years later, we remember Emmett Till, as we continue to fight for the justice of all our Black children who leave home each day.  Us mothers are praying that some overzealous police officer or community watchman does not decide that they are your judge, jury and executioner and you end up in a coffin. 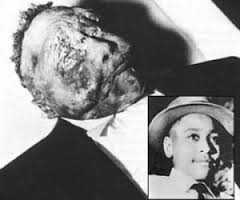