Liv was dancin’…and then Jake was dancin’ (with his joints lookin’ creaky and stiff like he needed some WD40), and then the unthinkable happened.  Somebody took Liv outta her apartment while Jake went to get a blanket to lay over the piano (that we ain’t neva seent befo’) in Liv’s apartment so they could dry grind on it.  And then after Shonda made us her bitch babies after such an emotional rollercoaster ride of an episode, we were left wonderin’ who took Liv for months.

Scandal returned tonight, and I was reminded I hadn’t seen Liv and Jake and Fitz nem since last year.  Apparently, a masked man snatched Liv up outta there in 20 seconds flat..and even though it was set up to look like they drove away in a car with her, the truth is they had her across the hall at her neighbor’s with both of ‘em duct taped all bout the mouth.  Now I ain’t neva seent Liv’s neighbor befo’…not even borrowin’ a cup o’ sugar or eggs, so you can imagine my surprise when I discovered that Dionne Warwick was livin’ just across the hall.  Dionne was in there watchin’ The Young and The Restless and the rest of her stories when she got caught up in the kidnappin’ scheme.

Before I go on, I just hope when Liv is finally rescued, that she either moves out of them people’s ol’ nonsecure janky arse apartment or get them damn flimsy locks changed.  Because errytime we look around, somebody is sittin’ up in her place uninvited.  I thought they had keys (and she had given too many out) but the truth is, I think they just keep pickin’ the damn locks.  The criminals got up in Dionne Warwick’s apartment the same damn way so it is clearly somethin’ the landlords should be addressin’.

After they sent Jake out on a wild goose chase, runnin’ after cars in his underwear (thanks Shonda..I needed that and smoked two cigarettes behind it), they removed all the surveilance equipment and tapes in Olivia’s apartment.  Cuz you know her townhome STAY bugged.  Dionne Warwick thought they had got over like Mahalia Jackson when they finally removed the duct tape from her mouth, tellin’ Liv errythang was gon’ be alright…and was prolly ready to break out sangin’ That’s What Friends Are For, when one of the captors shot her in the heart and sent her on an express train to the Upper Room.  I just felt like that was so unnecessary and so uncalled for.  Miss Jane Pittman ain’t have but two or three mo’ years left, so they didn’t have to do all of that.  She prolly woulda fuhgot errythang anyway if theyda just left her there..but nooo…they had to shoot Grandma dead like a dog in the streets.  And then to add insult to injury, they put her body on top of Liv and stuck ‘em both in the SAME zip up body bag!  How yo’ gon’ be criminals and travel with ONE damn body bag?  Cheap azzes!

The kidnappers took Liv overseas somewhere like Sudan (I think..this part is unclear….), and threw her arse in a prison cell with another “prisoner” who was already there.  Although they didn’t share how long Liv was up in them people’s prison, her hair went from nicely flat-ironed with lots of body to full blown frizzy unruly arse afro in about 10 minutes of tv time.  Liv tried to break out by using the underwire in her bra on some Inspector Gadget type sheeit but was caught.  The captors couldn’t shoot her, but took the other prisoner and supposably shot him.  Liv cried cuz  she didn’t mean to get that lil frail white man shot.  They had bonded over that bad food they were servin’ ‘em.  Liv had even let ol’ dude check her for a trackin’ device, knowin’ that if’n she had one, her daddy was out eatin’ full steak dinners at them people’s fine restaurants and not thinkin’ bout her since she’d pulled a pistol on him and tried to shoot him.  I felt bad for Liv.  Sat in them people’s prison til she damn near rot.  Nobody to put no kinda money on her books or give her anythang towards her commissary.

While Liv’s full 4B fro was being unleashed, she had dreams that Jake busted in and saved her…that she was livin’ in Vermont with Fitz, takin’ showers and sheeit and  cannin’ preserves and whatnots.  Abby came to visit her in the dream and let her know that she was the only Gladiator in this situation, and she needed to save herself.  Abby alluded to a pipe screw that fell, and wouldn’t you know that it was a clue because as Liv was breakin’ down ova havin’ to use the toilet without a liner, she saw that same pipe screw.  She unscrewed the pipe and used it to beat one of her captors all bout the head and ears.  She took his keys and his gun and ran toward the door!  The other captor came outta nowhere and even though she hesitated she went ahead and grazed that temple real good.  That do’ had bout fi’ locks on it (I’m hoping she realized those are the types of locks she needs when she gets back to her condo) but she got through them all only to run out and meet the other “prisoner” face to face.  He was in the cell with her to get information (he’s really her captor) and got it, i.e. the President will turn over heaven and earth to look for her).

I was mad at Liv because after she shot ol’ dude twixt the eyes, she threw the damn gun down.  Cuz keepin’ it for whatever was on the other side of that doe woulda been too much like right.  *side eye*  Her kidnapper told her to come along..they had work to do.  Next week’s episode shows Liv doin’ it for Tha Vine in a video tellin’ Fitz nem they gotta declare war OR she will die.  I don’t know what happened to ol’ Daddy Pope…but Liv needs him like she ain’t neva needed him befo’.  I think he is probably the only person that can save her.  I just hope he turns the volume down on that theme music that is likely to be playin’ when he comes to her rescue.

Let me just say this – Shonda had my nerves bad behind this episode.  Dream sequences like Dallas when that whole season where J.R.’s lil brother Bobby died was a nightmare….Liv bein’ broken down to the lowest common denominator….those kidnappers puttin’ a bullet in Ms. Sojourner Truth across the hall…Liv takin’all the underwire out her bra…Liv runnin’ down a never endin’ hall..and then finally comin’ out to the REAL kidnapper.  Tonight’s episode was all over the place, and played with my emotion like Craig nem did Big Worm’s in Friday.  Had me smokin’ cigarettes, Mary Janes AND black and milds and I don’t even smoke.  I’mma end this blog right here so I can go take a sedative… 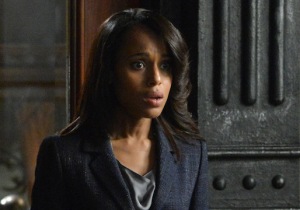 2 thoughts on “I Ain’t Seen Scandal Since Last Year Recap – When Them People Snatched Liv!”