So yeah, I had a conference call when Empire aired tonight so I couldn’t post nothin’..couldn’t read nothin’..could Tweet nothin’ bout Cookie and Lucious nem.  But right after the conference call was ova, I ran upstairs to watch Empire and what treachery did I find, you ask?  Well you ain’t ask but since you reading this, you obviously wanna know.  My husband was already watching it and ain’t told NOBODY!  So I politely made him rewind and watch the first 15 minutes he had already watched.  That’s what he gets for being all stealth and sheeit.  But this ain’t about him.  This is about Cookie and Lucious and they three sons and whatnots.

Cookie got it in her mind that she gon’ make a huge star out of the gay son.  The youngest son (this is how I gots to refer to ‘em cuz I don’t know they names on the show yet, and I don’t feel like googling) was all set to open up a nightclub with a performance.  Cookie wanted the gay son (Jamal!  It just came to me!) to be on the stage at the nightclub as well.  She thought this could be his coming out party, lit’rally and fig’ratively.  Now, one thing we done learned about Cookie is she inappropriate as hayle – she ain’t got no problems bargin’ up in Lucious house, or his office, or even the office baff-room if he up in it and she wants to talk to him.  Wait…we actually know two things bout Cookie cuz we know she be hungry as HAYLE.  Oh heck…we actually know three things cuz we know that thang ain’t met a leopard print fur she ain’t like.

Cookie barged up into that man’s (Lucious’) house on tonight’s episode.  I’m talmbout all in his gated community, at the damn gate, mouthin’ “open up this damn doe” to the security camera.  Now, if I’da been Lucious, I woulda pretended to not be home and not answered, but he still got a lil bit of love for his baby mama so he opened up the gates AND paid for the cab when she got out and told him to.  Lucious current woman saw Cookie at the gate and went and put on her a good matchin’ set of La Perla underwear and pretended to come in the room so Lucious could help her “get dressed”.  In other words, she threw a whole forest of shade at Cookie by letting her see what Lucious be workin’ wit and out erry night.  Cookie just looked at her like she was stank, and basically told Lucious to fix her a damn sammich cuz she was hungry.  As usual.

Now you got to be some kinda ‘that beetch’ to show up to your ex-husband house after being divorced for 17 years and have his “help” fix you a snack.  Matta fact, Cookie’s arse was sittin’ at the head of the table, just eatin’ up all the grapes and sheeit.  Boo Boo Kitty (Cookie’s name for Lucious’ girlfriend) snatched the grapes and was bout to throw mo’ shade til Cookie told her “that was my money, MY money (while she hit her chest for effect, or maybe I am just ad-libbin’ for effect) that bought this house, started this company and paid for them ol’ stank lacy drawls you just had on”.  Lucious had to remind Cookie about the non-disclosure agreement she signed – in other words, you ain’t s’pose to speak of that drug money situation evah again.  Now he does realize ain’t no honor among thieves and ex-cons right?  So the odds of Cookie following that non-disclosure agreement are pretty much negative zero.

Lucious told her Jamal was not going to perform with the youngest son…which made Cookie then show up to his job and bust up in the conference room, yet again, wearing a leopard print concoction that included a hat.  Looked like she was headed to an Ali fight in that full fur with the matching hat.  Lucious was in the conference room trying to handle one of his problem artists while convincing him to perform with the youngest son at the club openin’.  Cookie insulted said artist, who then proceeded to call her a beetch while standin’ up to fight her like she was a man I guess.  Cookie had to remind him that she done done HARD time with women who were wayyyy more man than him.  I SCREAMED.  That Cookie don’t back down for sheeit.

Precious was back on the show as Lucious assistant, looking wrong as hayle again in that sleeveless dress and that blond skunk wig.  I was trying to find one good thing to say about her character and I thought I liked her shoes til I realized they were supposed to be stilettos and she had worn them down to kitten heels.  She used Lucious’ personal bathroom and found his pills and googled them, discovering that Lucious has ALS and there is no cure.  He confirmed that he was dying to her and asked her to keep his secret.  I’da been askin’ for EXTRA coinage for that favor and would have turned in my resignation letter and started cleanin’ out my office that day.  I don’t keep secrets for rich foke without receivin’ compensation.

The oldest son (the Penn State grad with the MBA and the white woman) is bi-polar and it’s apparently life-threatening.  He ain’t been taking his pills and keeps cancelling his dr’s appointments.  This led to a scene that had me scratching my head at first, cuz the wife went in the kitchen drawer and took out a bib that she hugged him with.  I was like ‘damn they got a baby?’ cuz I hadn’t seent one.  She then put it around her neck and dropped to her knees.  Yeah….that’s pretty much all I gots to say about that other than they wild on Fox.  That and don’t y’all be takin’ y’all baby’s bibs at home and be usin’ them for evil!

The youngest son had controversy surrounding him this episode because he showed his privates on video in a public place (nice restaurant) and then went on a rant about President Obama being a sell-out, etc. in front of a bunch of good white people.  Now, I know this is scripted but I ain’t like that one bit.  Betta not nobody say nothin’ bad about JESUS, Martin Luther King Jr and Barack Obama.  They are off-limits!  They did show Lucious tryna apologize to President Obama, and he got what he shoulda got – a dial tone. I SCREAMED again!  LOL!

Jamal was supposed to come to a press conference his mama set up so he could come out to the world.  He didn’t show up cuz his daddy (Lucious) threatened to cut him off.  For Lucious to have tried to put him in a trashcan when he was younger, he must care about his son cuz his arse is payin’ for everything – clothes, shoes, food, a $12,000 love nest for Jamal and his boo (Cookie called his boo “Dora” – I HOLLERED), his new piano, snacks, etc.  Of course, that made Cookie mad but she got what she wanted in the end – the two brothers performed together onstage and the audience loved it even if at first, Lucious was surprised to see it go down.

Lucious attempted to apologize to Cookie after the performance, and said that his artist should have never called her a beetch and that’s why he dropped him from the label (they had another meeting where Cookie had busted up in the elevator with errybody in it – that thang don’t care where she bust up in – and the artist called her a beetch again.  Cookie couldn’t believe her son nor Lucious came to her defense, and Boo Boo Kitty laughed.  Cookie tried to run up on Boo Kitty in the elevator and do a Solange, but they held her back).  Boo Boo Kitty saw the interaction between Cookie and Lucious at the club and came over to talk crazy.  Cookie told Lucious ‘you need to drop that young bitch’ and then Boo Boo Kitty said ‘he prolly will…when I’m your age’.  That little close cropped haircut thang can READ.  She told Cookie ‘but by then you will be 110’, and I LIVED Chile.  I don’t know if that thang went to college, but she had to go to somebody’s readin’ school.

Oh, they found Bunky (?) ‘s (the bodyguard who is Cookie’s cousin) body floating in the river.  They showed it on TV, and I threw up in my mouth.  Fox will show any damn thang!  Lucious fake cried knowin’ he kilt that man and vowed to get revenge on whoever did it.  Bunky ain’t leave sheeit, so I hope he ain’t got no wife and kids.  Cuz all they had for him was that big arse gold chain, and one of Cookie’s boys got that.  Looks like Cookie is caught up in some undercover sheeit, working as an informant against Lucious and Empire.  She betta be careful.  We know Lucious don’t care who he shoot and kill down by the river.  See ya next week! 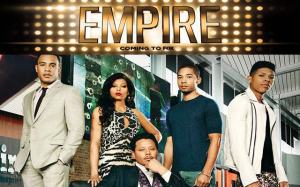