Now y’all know that I don’t normally do randoms and new girls on my favorite reality shows.  Matta fact, I shaded Claudia Jordan 10 kinds of bad when they announced that she was gon’ be the newest non-housewife to hold a peach on RHOA.  I heard Peter was up for the role, but ain’t look right in a long gown.  I’m sure that won’t stop him from getting in women business and tryin’ hard to be the newest housewife for next season though.  I’m gon’ have to back track.  Being a woman of a particular age, I reserve the right to change my mind.  And today just been one of those days.  My Cowboys lost on the worst NFL rule evah, and foke started comin’ out the damn woodwork on my timeline talkin’ noise.  I’m talmbout foke who I fuh-got were my FB friends until today cuz they don’t neva say NOTHING.  Cowboys lose and errybody and they mama, daddy and aunt-tee got somethin’ to s ay.  Yes, I’m still in my feelings.  I own it, but I digress.

Now I am sorta feelin’ Claudia Jordan.  She naturally funny and them one-liners be givin’ me five kindsa life.  Them toes though is a WHOLE ‘nother story.  It doesn’t seem like somebody that pretty would have all of that goin’ on in they shoes.  Now I know models have a tough time cuz them tight arse shoes they be havin’ to rock on the runway be hayle on a toe, but damn..them dogs was worse than the dogs Eddie Murphy clowned in Boomerang.  I wish I had one of them pens Will Smith had  from them people’s Men In Black movie to erase them bunion and coned thangs outta my memory forever.  I almost want Claudia to get them foots (yes foots) cut off and start ova.

Demetria McKinney (the other random who tryna be a pop star at 35) has invited all of the girls to Puerto Rico to watch her perform.  Apparently, Roger Bobb is footing the bill for errybody.  Of course, errybody shows up there BUT Roger Bobb.  Whenever his “woman” (I put that in air quotes cuz it look like ERRYBODY in Atlanta been with Roger Bobb, including some foke that just passed through the airpote on they way somewhere else) has an event, Roger Bobb makes it his damn bidness to NOT be there.  I think that’s why he got that last name, cuz he shole be duckin’ and dodgin’ and bobbin’ and weavin’ to stay up outta the venues his woman be performing and showin’ videos at.  It appears she scheduled this performance on his head shavin’ night.

Everybody felt bad that the lil Marge Simpson blue hair wearin’ random from the last show put Roger Bobb on front street in front of errybody at Kandi’s party.  Kandi invited Demetria out to apologize (I still say Kandi knew her friend was gon’ spill that whole pot of tea at that party), and later Nene and Phaedra showed up at the studio to meet with Demetria too.  Phaedra is the WRONG one to come out to provide support to pretty much anybody especially somebody she don’t know.  Y’all know Phaedra claim she a Southern Belle but that thang will come fuh somebody in a minute, all the while callin’ ‘em “honey” so they don’t know how to feel.  That’s why I’m surprised she don’t be winnin’ cases, cuz she seem to be so good with words.  She said some real inappropriate sheeit in that studio.  I mighta had to cuss her out for a good 60 seconds before tellin’ her high hairline at the nape arse to get out.

The girls finally made it to Puerto Rico (I’m tryin’ to figga out why Demetria and Porsha were both wearin’ them tall arse heels in the airport – that couldn’t have been comfortable!), and I was like “yasssss…..” because I knew it was gonna be drama even how the girls were separate and sheeit while traveling.  And I knew when I compared Porsha’s nem rooms to them closets Nene nem got, there were gon’ be problems.  Nene is VERY. RICH.  And rich beetches don’t like hotel rooms that ain’t suites.

Demetria was tellin’ Kenya nem how she felt like Phae Phae came for her, and of course, Kenya done twirled twice and told her she needed to speak up.  I was rubbin’ my hands together and grinnin’ and saying “yasssss…” cuz I knew some sheeit was gon’ pop off at dinner.  Phae Phae added more fuel to the fire by givin’ Demetria (and Demetria’s stylist who was NOT pleased) a backhanded compliment.  I think she added a “chile” to the “honey” that she delivered with all them shade trees.

The girls went to dinner, and you could just cut the tension with a razor blade from Marlo’s (remember NeNe’s old friend) bra.  I am trying to do better about not wanting to watch drama between black women, but the debil done won the round this week cuz that whole dinner gave me life, from birth to senior citizenship!!!!  From the drink orderin’, when Nene asked for somethin’ very specific and Porsha and Phaedra had to have the same, it was clear the women had lined up on distinct opposing sides.  Phaedra, Nene, and Porsha were Team Shade and Demetria, Kenya, Cynthia and Claudia were Team Wait Are These Beetches Really Tryna Shade Us.  Hey..it’s late and I couldn’t come up with a better name for all of them together.  Kandi, as usual, was somewhere in the middle.

Demetria set it off by tellin’ Phaedra she felt some kinda way bout how she had talked to her at the studio (she asked the gul if she was a crackhead…asked if her man Roger Bobb (yes, they still callin’ that man by his whole damn name!) needed a liver transplant cuz he shouldn’t be just dating her fuh 8 years….asked if she was really tryna be a 35 year old pop star..etc.).  Phae Phae wasn’t tryna back down and Demetria went in on how the only thing they got in common was the numma 8 – cuz Roger Bobb been in and out of relationships with Demetria fuh 8 years and Apollo gettin’ ready to go in them people’s penitentiary fuh 8.  OUCH.  You know Phae reminded her that at least she got a ring…neva mind that she married an ex-con without a pot to pee OR cook in let alone a window to throw it out of.

And then the conversation went real left with Nene and Claudia.  There was a lot of kee keein’ goin’ on and side conversations and snickering and giggles.  It was clear Nene wasn’t feelin’ Claudia so it sorta started from there.  Nene told Claudia to “ask Rickey Smiley” and Claudia went IN.  And this is where I crowned Claudia Jordan the QUEEN of ultimate shade throwin’.  Fuh one, she ain’t back down AND she a newbie.  You know Nene will make a newbie feel bad and dismiss them with an ol’ “Bye Girl” quick.  Claudia was not to be dismissed.  When you got toes like she do, you ain’t got sheeit to lose and she proved herself a formidable opponent in the war of words.  I hollered when she said when Nene was her age, she had edges..when she questioned Nene goin’ to college, when she put Nene’s arrest record out there and reminded Nene how she had slipped and slid all up and through them people’s stripper poles.  And then she hit Nene wit a left…hit her wit a right…and knocked her out like fight night when she told her the word is BRIDESMAID – “the S is NOT silent”.  BAY BAY – I SCREAMED!  Cuz errytime Nene said somethin’, Claudia had some mo’ stuff to say all matta factly.  Nene got in one good line but Claudia got in SEVERAL.  Claudia READ Nene for all kinds of nasty filth, and I LIVED.  And then I died and lived AGAIN.  Nene 1, Claudia 110.  LOL!  I almost forgot about my Cowboys.  For like 30 seconds and then I remembered and felt bad all over again.

Next week, the ladies are still in Puerto Rico.  There is sure to be MORE foolishness and shots fired.  *cue overly dramatic soap opera music*  Will a Puerto Rican lady from the audience tell Demetria that she too has been with Roger Bobb?  Will Claudia take her swim shoes off so her toes can soak up the sun?  Will Kenya twirl?  Will Nene retire that ragmop wig she been wearin’?  Will Demetria actually be able to perform or will the concert be just like her video release party when the video ain’t work?  Tune in next week for the answer to these questions and more…  Follow me @staylorclark on Twitter! 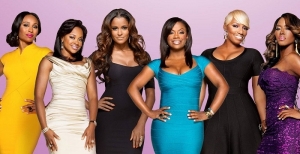