Last night, I was overly tired.  I’m talmbout could barely move and my joints were achy.  These are the side effects from breast cancer surgeries and treatment….that I will likely have to live with for the rest of my life. If I sound sad, I’m not — because even in the midst of the aches and pains and fatigue, I am BLESSED to be here and thankful to GOD for more time to watch my baby grow up.  I am not taking life for granted, no matter how it comes.

It took all the little energy I had to take McKenzie (my baby) to Monday night soccer practice and in choosing to do so, I missed a birthday celebration for a dear pal (Happy Birthday Rachelle – I’m sure you understand :-)) and a fundraising Happy Hour for my dear college home (Jackson State University – DFW Alumni Chapter, theeIlove! and you can expect a small contribution to the scholarship fund from me next month).  I also was mentally drained, waiting for the verdict for the Michael Brown shooting case in Ferguson to come down.  For the life of me, I couldn’t understand why they would wait until nightfall to exonerate the officer.  They had to know that wasn’t going to go over well.  I’m surprised that “they” are surprised at the response.  Now, let’s be clear, I fully EXPECTED Officer Darren Wilson to walk.  Though some will try to say it’s a new day in the US, there is no more racism, and my favorite “look we even got a Black president”, the truth is racism is alive and well in America.  Actually, it might have been a better situation back in the 60s because it wasn’t subtle – it was out there, in your face, and nobody was really trying to hide it or tell you you were crazy if you thought it.  The truth also is there IS police brutality against young black males.  And more often that not, it goes unchecked.  It has also claimed the lives of many a black son.

My heart hurts this morning for a mother who had to watch her son’s lifeless bloody body lie in the streets for FOUR HOURS before it was removed.  Who will never get to see her son again and will be haunted by memories from that day. She. Will. Never. See. Her. Son. Again. In. This. Life.  Hold him.  Dream for his future.  I am not excusing anything criminal that Michael Brown may have done, but nothing, NOTHING, he did warranted those 10 shots that were fired.  Nothing he did warranted those two bullets being put in his head.  Eyewitnesses said Michael Brown had his hands up…he had surrendered.  He was UNARMED.  You mean to tell me a police officer is not trained to take down an UNARMED man without overkilling him?  That is a fundamental problem with law enforcement training that needs to be fixed.  My heart hurts because it could have been one of my two sons lying dead in pool of blood in that street.  Any street.  As the old people put it, but for the grace of GOD, there go I.

I started to wonder, at what age does a young black male become such a threat to society, a community, us all, that it warrants his killing when he has no weapon?  At what age do we give up on them?  At what age do we consider their lives meaningless?  My heart hurts this morning for a community that has turned on itself, looting, and burning, and killing, and fighting.  Unfortunately, none of that will bring Michael Brown back and will only result in more senseless death and hurt.  My heart hurts this morning because there are people who will label Michael Brown a thug and believe that Officer Wilson did nothing wrong.  That there is one less Black thug on the streets, and they will support this type of thing happening time and time again, with no retribution.  At the very least, Officer Wilson should have been found guilty of manslaughter, because that is what he did.  The grand jury got it wrong.  Michael Brown was SLAUGHTERED – no different from a deer that has been killed and left lyin’ in the streets after being hunted.  And then to add insult to injury and death, Michael Brown’s dead body was left laying there in the street as a painful reminder of the meaning of Black male life to the masses. 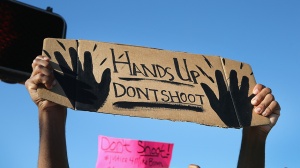