This Scandal recap gon’ be quick.  I’m still reelin’ from witnessin’ the arse whoopin’ the Republicans put on the Democrats the other night.  I don’t understand the strategy of not standing with a sitting Democratic president and at least pointing out that things are better under Obama than they were under Bush.  Hayle if I had been runnin’, I woulda ran on gas prices being at the lowest they’ve been in YEARS.  But enough about politics.  We need to ride this train all up and through Shondaland.

Scandal started with a bang.  Lit’trally and fig’ratively.  Ol’ boy was sittin’ in the dark drankin’ Ciroc when Quinn showed up at his place to question him.  That gul don’t care what she do or where she go!  She wanted to know why someone had been takin’ pics of Liv.  Instead of givin’ her answers…or even makin’ her pull out some pliers, plastic and duct tape, ol’ boy put a bullet in his own head.  Now Quinn do be talkin’…a LOT..and not really saying nothin’ (i.e. she ain’t got much of a storyline without Huck or Charlie), so I get why one would want to put a bullet in they head after she start askin’ all them damn questions.  But that suicide totally caught me off guard like that openin’ scene in New Jack City when Kesha lullabies that ol’ Rastafarian.

We met Abby’s (“Red”) ex-husband tonight, and found out he used to box her all bout the face, head and clavicle.  He was almost the new senator for VA after a scandal broke with the old senator goin’ potty on tape while wearin’ a diaper, and otherwise doin’ it “for the Vine”.  But once the guy who tried to get the old Veep in as President found out what had happened (in a sick twist, he was trying to push up on Abby (“Gabby”) and get him some Red), he made sure the almost-senator was found out.  Liv’s nem job was fixin’ up the challenger to the abuser, which included a fresh weave, some of them clothes from the Limited, and quite a bit of hair removal.

With Jake from State Farm up in them people’s prison, Fitz tried to get back in Liv’s drawls.  He pretty much had phone sex with her while we watched.  I smoked two cigarettes and drank two glasses of wine while he described, in great detail, what he was gon’ do to Liv.  Somethin’ bout spreadin’ her cross the desk in the Oval Office and being in a givin’ mood.  Chile, Liv unbuttoned her own blouse and started fondlin’ her own boobs.  I thought about doin’ the same, but y’all know I ain’t got no boobs.  Damn you, Shonda!  *raisin’ fist*.  And then that thang hung up the phone like Liv had called him on a 1-900 numbah and had run out of money.  Liv fell back in the bed…and I’m sure had to get up and take a shower on the commercial break.

The fried chicken plate-havin’ Mellie was gone and the ol’ Mellie was back.  Doin’ dirt when she was s’posed to be changin’ out the White House china.  And in the meantime, exposin’ ol’ Cyrus’ eff buddy in the process.  Cyrus gon’ learn bout messin’ with them THOTs.  Ain’t neva no good come from enablin’ a THOT.  I know Cy lonely but he needs to set higher standards for himself.  James is prolly rollin’ ova in his grave, being ushered in to the pearly gates by Jake notwithstandin’.  And where they little girl at?  I ain’t seen hide nor hair of her since James died.  Damn, Damn, Damn.  Whenever a James dies, stuff on the homefront don’t neva be right.  Y’all remember what happened to the Evans fam’ly up in them people’s Cabrini Greens projects.

Liv went to see Tom in prison….which made for one of the most uncomfortable scenes on Scandal, ever. Tom is so funny-looking, like he ain’t got no eyebrows or wrinkles or somethin’.   He seemed to want to join the Jake/Fitz/Liv love triangle and make it a quadrangle.  Called Liv Helen of Troy.  Mo’ than one time.  Told her she ain’t have no daddy…she was just like him and Jake…taking orders from Command.  Matta fact, he damn near did one of Daddy Pope’s monologues and my mind started to wander.  Liv tried to get him to confess that Rowan Pope had ordered the hit against Fitz’ son but he stuck to the original story of Jake orderin’ the poisonous Epi Pen murder.

When Liv got home from them people’s maximum security prison, her daddy was waitin’ in her apartment.  First off, I ain’t know Liv was renting that place (ain’t she got enough money to buy a spot?).  Second, foke just be sittin’ up in her apartment all willy nilly, so she must have a gang of spare keys out or they pickin’ them damn flimsy locks she got.  I think her daddy was up in there with a roast on her stove.  Cookin’ and sheeit.  He let Liv know that she will not win against him and that she need to stop pickin’ Jake and Fitz nem ova him because he been protectin’ her and making sure she is safe.  I bet Rowan be tired as hayle givin’ the same monologues week after week.  But he has to understand, they be tryna listen but they minds be wanderin’ after the first 60 seconds, cuz mine does.  He should cut them slack for not rememberin’ that they ain’t s’posed to cross him.  Liv didn’t back down.  Y’all know she got tools he will NEVA have access too.  Matta fact, she was energized enough to send a message from Command to Tom (i.e. she paid off a guard to shank him), puttin’ him in ICU hooked up to all kinds of tubes and wires and machines and such.

Next week, they gon’ all work together to take care of Daddy Pope.  You know Rowan is not goin’ down without a fight.  They tried firin’ him last season, and we saw how that worked out.  That thang to’ up that White House and was back as Command after just a couple of weeks.  The next episode is sure to be explosive…lit’rally and fig’ratively.  I’ll be watching.

And yes, I watched How To Get Away With Murder.  I fell asleep on it though.  All that flashin’ back and whatnots be havin’ me confused.  I see Sam..but Sam is really dead.  I see the one girl he ran up in, but she dead too.  I see Annalise walkin’ all hard in a wig…and then I see her in her house with her natchal and her eyebrows washed off.  I feel like I’m takin’ a test, but my Scantron don’t match the questions.  Yes, I’m tellin’ my age.   I’m gon’ hang in there with this show though…when I don’t drift off like tonight…. 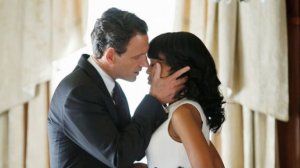