Now let me be completely transparent.  I ain’t watch the whole thing.  It was pretty clear 4th quarter that Peyton Manning was goin’ home with that mirror ball trophy.  Oh wait a minute..that’s Dancing With the Stars.  I mean that Vince Lombardo trophy (and no I ain’t google that – I like football when my team (and all of America’s team, still) is playing.  The Broncos sent the Panthers home hidin’ their tails and lickin’ their wounded paws.  The Panthers had an AMAZING run, and almost went undefeated in the regular season and got to the big game, while the rest of the teams were at home watching.  But in the words of that ol’ sage and bad driver, Brandy, (you rememba – she killed somebody), “Almost doesn’t count”.  I really wanted Cam nem to win – I like everybody to have at least one ring – but I’m thinking those black and yellow zebra print leggings were bad luck.  If’n he had worn some regular pants and stopped all that damn dabbin’, he probably woulda been kissing that trophy last night.  You know the football gods weren’t here for all of that he was doing.  The good news is he’s young…and he has the chance to come back next year.  Congrats to Peyton Manning though – what a way to ride out in the sunset (which is much betta than what happened with my babydaddy, Dan Marino, who still ain’t get one of them people’s rangs).

I don’t know who got the MVP award because I started watching Lifetime, but Beyonce & Bruno Mars deserved to share in that thane.  I was enjoying Coldplay even though I ain’t know the words to what they were singin’ and thought it was a bit Disney-ish with all those kids and colors and such.  But Honey….I got my WHOLE life (from cradle to damn near grave!) when Bruno Mars stepped out on that stage dressed in black leather doin’ the damn thane, followed by Beyonce high stepping on the FIELD like a drum majorette with her all girl crew.   Yassss!  And then when they had that dance-off challenge, Bay Bay, I lost 12 eyelashes, both eyebrows and ALL my baby hair.  Beyonce was thicka than a snicka (she done fell off that vegan thane and all them detoxes), but it didn’t stop her from grindin’ and droppin’ it low, like it was hot, and errythane in between.  She taught us all a lesson last night…even when you stumble, you don’t have to fall, you make that thane look like a part of the show and get right back up and into it without missin’ a beat.  I gave that recovery – a double squat jump – tens across the board!

Lady Gaga did an awesome job with the Anthem…cuz I was a lil bit scared.  You never know with her, but she left all that meat and other trickery at home (save the American Flag stripper shoes) and wore a nice red suit, even though them red eyelids and her lack of edges made me a little bit distracted in the beginning.  Sheeit..maybe she saw Beyonce and Bruno in rehearsals and they snatched her edges.

The Broncos won last night, but Beyonce was the clear winner, having put out a video and song between the hours of 4 and 5 p.m. on Saturday.  GOD rested on the 7th day, but Beyonce SLAYED, performing said song at the Super Bowl on Sunday.  That thane has a hayle of a marketing team.  Yes, I got one foot in the Beyhive cuz Imma fan of her grind.  I loved the video (which she directed – that is amazing to me!), but the words of the song don’t match.  I guess I expected the song to be deeper than a couple of references to the Black culture, Black Lives Matter, etc.  It is like the reverse of Janet Jackson’s Rhythm Nation if that makes sense.  Janet danced her damn arse off in that video, but the words of the song were deep.  There really isn’t anything that’s deep in Beyonce’s song, which is what makes the video so appealing because it IS deep.  I would have liked to see her lyrics go deep for a minute, though, instead of the usual “haters, I slay, Imma boss bih, bow down tricks, I rock labels” diatribe.  But that is her fanbase – they want her to sing about what she sings about to a good arse beat, and Formation does that…shouting out hot sauce and Red Lobster (free advertising, and my fave restaurant) as she talks about why she IS and shall always be the Queen Bey that she is.  Love wins, and Beyonce wins all the time.  She has time for her lyrics to grow up I guess. 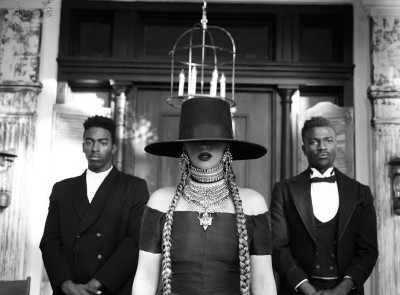