Well, it was better than the Aaliyah movie…and maybe that’s cuz they ain’t let Wendy Williams nowhere near it.  The casting was pretty much spot on, though I ain’t particularly care for the actress who played Toni.  I thought she was too meek and mild – not enough swag or thickness to her.  But once she cut her hair, I was like “I guess” and let her make it.

I tell you another one Lifetime “tried it with” on the casting – Towanda Braxton.  Those two Pocahontas braids they put on that lady weren’t fooling nobody.  I bet Towanda was mad as hayle.  Oh, and the “Pebbles” casting was off as well.  I liked the one from the TLC movie better.  Y’all know the real Pebbles was watchin’ that movie and taking notes so she can file her lawsuit Monday and have her attorney send a cease and desist letter.  They need to start leaving her character outta these movies.  They gon’ learn.

I loved Debbi Morgan as Miss Evelyn.  She earned erry bit of her check in that movie especially when she threw errythane but the kitchen sink at the door her husband was hidin’ behind.  I was waitin’ for her to break that door down and start beating him up like Katherine Jackson did in that Jackson 5 movie.  And then when she snatched they picha off the wall and threw it on the floor and stomped it?  Bay Bay it was just like when Bernadine lit her cigarette and then set her husband car on fiyah in Waiting To Exhale.

Not really much I can say about the movie, because honestly, we already knew Toni’s story.  I’m glad she got to clear her name around that first bankruptcy, cuz I remember them talking about her extravagant spending in the press.  And when she mentioned that Gucci silverware, I found myself wonderin’ if food taste betta on it, cuz y’all know I’m over here eating with plastic sporks.  LA and Babyface oughta be shame for how they did their artists.  Blindin’ ’em with cars and checks that they needed to pay back.  They know good and damn well they ain’t have no business letting Toni buy boobs out of her artist budget like that.  And then gave that girl a check for a hundred dollars.  Well it was $1900 but still.  Bay Bay – them people repo’d errythane Toni had and even took her Gucci silverware, all her Grammys, and a few pairs of her drawls.  That house was so damn bare when them creditors left.

And then she filed a lawsuit against her record company (including LaFace nem) and won. Babyface (Jeffrey from The Haves and Havenots..spot on casting) had her back but she couldn’t talk about the settlement for 10 years.  20 million dollars?  Sheeit…I wouldna told NOBODY not even Miss Evelyn.  The gag order has been lifted, and that’s why she speaking out with this movie.  She got with Keri Lewis (the actor cast as him looked just like that man)…and got knocked up right after that long bedroom scene in the movie.  She had an abortion cuz Babyface nem had her sign something saying she could dry grind as long as she ain’t get pregnant behind it.  Or maybe it was the acne cream company.  They was controlling errythane about that girl!  She got married…and had her two kids.  One was diagnosed with autism, and the movie touched on that bringing awareness on a national stage.

She did a residency at Flamingo (bringing her sister along cuz her mama told her never forget them like Tina Turner mama told her in that movie – “never forget my blood”) but collapsed on stage, and had to stop performing because of her rare heart condition.  A technicality in her insurance coverage left her exposed to the concert promoters and creditors again, so she had to file bankruptcy a second time.  I know that bankruptcy judge and them court people got tired of Toni Braxton.  She came out on top…again…and did Dancing With The Stars and that reality show with her sisters, helping Tamar become a break-out star, and she picked up yet another Grammy in 2015 for her collaboration with Babyface.  She is also a Lupus survivor.

All in all a solid movie, even if we knew pretty much errythane that happened already.  And Miss Toni herself made a cameo in the movie at the end, which was EVERYTHING.  Yes, I’mma  fan.  Now if Lifetime had just not followed it up by re-airing Whitney Houston’s Beyond The Headlines.  And I had JUST forgiven them, finally, for the Aaliyah movie. 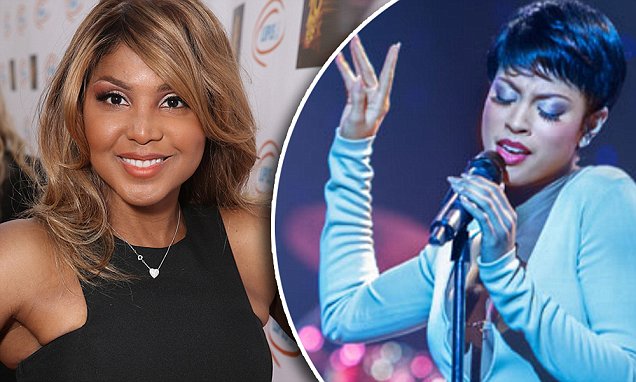