So just when I was wonderin’ what I would blog about after Daddy Pope got sent to jail on the Scandal Finale AND they finally turned the lights on on the set of How To Get Away With Murder……Rachel Dolezal happened.  It was like getting pennies from heaven, cuz even though I’m super late on this issue, I gotta weigh in.  But first, I got to say – Won’t He Do It?  I wonder if Rachel even knows what that means, but I digress.

Rachel Dolezal is the white woman who been passin’ for Black ever since she got a Pell Grant and them foke’s scholarship money to attend Howard University.   I mean she been playin’ Black for almost twenty years from what I can gather from these Innanets.  She must be one hayle of an actress cuz I don’t know how she was able to get away with it for so long.  It’s interesting to note that she started college at Belhaven University in Mississippi, where she did not attempt to pass for Black.  Nobody wants to be a Black woman in Mississippi (or a Black man for that matter) so she’s at least smart.  And then she transferred to Howard University, and this is where she apparently went all Different World.

America IS a melting pot, and because of that and all the racial “blurring”, I would not have been able to tell Rachel was not biracial just looking at her.  She definitely looked the part – afro all light, fluffy and moisturized.  Braids all meticulously done.  With hair color.  Skin all tanned and a good shade of beige.  She fooled enough people to become the president of her local NAACP chapter.  You know Frederick Douglas done rolled over and stood up in his grave behind that!  And she is an authority on the Black race, and expert if you will, in the Spokane (Washington) community.

All of this begs the question on how this happened, and why?  I can’t really relate to what’s goin’ on with this issue (though those #AskRachel quotes were funny as HAYLE on Twitter – y’all know Black Twitter ain’t got no filters when it comes to roastin’ foke).  Hayle, I even jumped into the fray, albeit late – “Is #AskRachel ova, cuz I wanna ask her how she cook her greens?”.  I can’t relate, y’all.  I don’t think I could play a convincing white woman even if my skin wasn’t chocolate brown.  I mean, I know a right smart of white women.  They are mostly successful…smart…well-educated…connected..with good jobs….good credit…houses…cars…husbands…kids.  I “think” they get to shop without folks thinking they might steal something.  I “think” they get to go to the bank and actually get loans and credit cards.  I “think” they get married at a higher rate than Black women, and I “think” their engagement rings are usually bigger.  I “think” they get to pretty much do what they wanna do, and they do pretty well in business…getting promoted regularly without havin’ to worry about the “angry Black woman” syndrome that plagues me and my sisters alike in corporate America.  I “think” they get to bring their WHOLE selves to work…and not have to pretend to be someone else to make themselves more palatable to the powers that be.  I “think” they get to be celebrated as standards of beauty, and even when they do something or get something that Black women been doin’ or havin’ for DECADES (see butts, lips, etc), it is lauded as the IN thing.  Yeah, I wouldn’t know enough about being a white woman to portray one even if my skin didn’t tell the truth.

So, HOW did this happen?  Maybe it’s us.  We’ve created a generation of foke that think they can be anything…do anything…say anything.  We’ve told them it’s okay to color in and outside of the lines when it comes to gender.  You get to choose if you want to be a man or a woman (look at Caitlyn Jenner (who I’ve affectionately renamed Margaret Francis Agnes Jenner because I don’t know no 65 year ol’ Caitlyns)).  You can be on the basketball team even if you suck, and you will still get a trophy.  You get to wear your hair and your clothes however you want because you have that freedom, even if you sag and show your underwear.  And freedom of speech lets you say whatever in the hayle you want. Whenever you want.  So honestly, society must take at least 1/16th of the blame.  We’ve blurred the lines in a lot of sheeit so to speak.  I still don’t know how she got away with it for so long.  Rachel shoulda been sniffed out a long time ago.  ESPECIALLY at Howard University, an HBCU.  The fact that she was able to infiltrate and assimilate speaks volumes.  Or maybe it’s saying that just like being transgender, you can be transracial.  I still don’t think I could declare myself a white woman, and have ANYBODY believe that sheeit though.  I find it hilarious that her parents outed her, albeit decades late.  She must have made them mad.  You know, not shown up for dinner or called enough.

So where do we go from here?  Maybe we don’t go anywhere.  Maybe we talk about this for two more days until the next news story breaks.  Maybe we play a few more rounds of #AskRachel, laugh and move on.  I do know there are more important things to talk about.  But, we gotta at least talk about THIS.  Rachel Dolezal has claimed an oppression…a struggle…that wasn’t hers to claim.  She must not have done her research, because last I checked, being a Black woman was HARD as hayle.  Just last week, a young Black girl wearing a bikini was being thrown to the ground by a police officer for SWB (swimming while Black).  We die sooner…get married less…make less money…have less power…the list of “lesses” go on and on, unfortunately.  Why she would feel comfortable claiming that (especially after spending some time in Mississippi) perplexes the hayle outta me.

Again, I’m interested to see how this plays out BUT I still think if I was one of her friends, I’da sniffed her right on out after just a little while.  The whole being born in Montana thing woulda been the first clue.  Askin’ her to cook greens and make hot water conebread would have pretty much sealed the deal on her being White because I bet her soul food is rather nasty.  I’m sure she cain’t make macaroni and cheese unless it comes out the box.  Follow me on Twitter @staylorclark 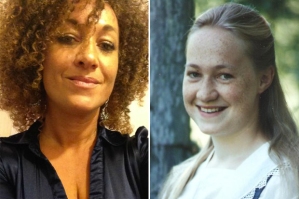