I ain’t been over here in a month of Sundays.  I gotta be mo’ diligent on blogging…definitely gotta do betta.  But this ain’t bout my bloggin’ histry – I’m supposed to be talmbout Scandal tonight.  Liv nem still had Russell, but I don’t know how he went from the gun barrel to his fo’head to being topless and tied up.  There were tornadoes in the area and local news had interrupted programming to tell us about the weather.  I felt bad, because once I realized it wasn’t in my area, I wanted them to stop talkin’ bout the storms and lemme watch Scandal.  Yeah, I know..selfish.  But I had breast cancer…twice..so I deserve to be a little selfish now and again.  Seriously though…glad everybody is okay.  Y’all like how I just did that – brought a gun to a knife fight tellin’ y’all bout my battle so y’all can be like “carry on” versus tellin’ me I’m selfish.  Anyway….

Liv wanted to know who/what Foxtail was, and told Russell they weren’t going to kill him but Huck and Quinn nem was gon’ make him wish he was dead.  And with that, Quinn and her drill were back in action.  They put a small hole in Russell’s kneecap and ain’t have nobody’s numbing gel.  Russell screamed bloody murder.  I was just thankful they ain’t drill them abs and upper chest regions, cuz that thang body is TIGHT.  That thang been drankin’ plenty milk cuz it sho’ done done his body good.  REAL good.  I decided Russell ain’t even NEED knees at that point.

Can I just say I love the Vice President?  They put her into that position as more of a figga-head than real politician.  You know how they did Lady Eloise in Boomerang.  Yo’ photo errywhere but you ain’t got no power.  That thang doin’ errythang though to be relevant.  She was s’posed to be takin’ photos and saying hello at the Naval station and instead she done discovered one of the seaman (woman) had been raped.  I did like how Shonda and the Scandal Writers handled such a difficult emotional topic from beginning to end.  Liv was brought in as a fixer, as was a military attorney that was supposed to be helping them.

At the end of the day, the rapist was brought to justice, but not before the young seaman had to undergo an abortion in a gripping scene.  You know Shonda nem is good for using this show to test boundaries and make you think about and question where you stand on the real and sometimes controversial issues of the day.  The writers and actresses were able to show how it feels for a woman to be raped and then become impregnated and have that constant reminder of that brutal crime that was committed against her.  No matter if you are pro-choice or pro-life, you felt something during that scene.  I’m sure anybody who has ever dealt with this issue first-hand got emotional.  I used to be in the military and remember this issue around our base.  Apparently, some men in the military think “don’t ask..don’t tell” applies to rape.  Getting off my soapbox and back to Scandal….

Liv left Quinn, Huck, and Russell in her apartment (I think Jake was across the hall in the ol’ neighbors place – that ol’ lady musta paid her rent up for some months, cuz Liv nem always up in there doin’ dirt) and instructed HuckleberryQuinn NOT to answer the door or the phone.  You know the same stuff yo mama used to tell you not to do when she was leavin’ you at home by yourself when you were 10 back in the 80s.  CPS and child welfare musta not had nobody workin’ there when I was growin’ up cuz all kindsa sheeit that shouldna gone on was going on back then!  She told them that her daddy was gon’ be lookin’ for Russell and all of them too, so they needed to just let the phone ring, close all the blinds and bolt all the locks.

Then Russell’s phone rang.  Quinn told Huck not to answer it but he was sure he could track Daddy Pope and get him fo’ Daddy Pope got them.  How many damn times does that man have to tell these fools that “you don’t take Command…Command takes YOU”? In other words, they ain’t dealin’ with no amateur!  They only needed Daddy Pope on the phone for 12 seconds..they answered and then ain’t say nothin’…that man hung up at 11.56 seconds.  Just long enough for Russell to try to cough with some old dirty drawls taped in his mouth.

Mellie still runnin’ for that Senate seat.  And she still got Lizzy Bear (Portia DeRossi) assisting her.  Lawd..Lizzy Bear ain’t been able to sit on a couch right since Huck ran that cheese grater back and forth ova her back.

Jake from State Farm tried to tell Liv that Russell wasn’t gon’ give up no information on Foxtail no matta how much she tortured him.  Lawd knows, Russell tried to take a kill pill (I think it was cyanide) that he had tucked in his jaw when they took that dirty sock out.  Jake ended up bringin’ Russell a beer and untying him and they chatted bout bein’ B613 boys, talked lovingly about they “daddy” (Command) and other stuff.  I was like why are repeating sayings from the Book of Rowan?  That thang done shot one of ‘em, and had the other one damn near gutted.  After they finished drinkin’, Russell told Jake to tie him (Russell) back up and send back in the ‘crazy dude’ (Huck).  Bay Bay, I SCREAMED.

And speaking of Jake – that thang must got some good insurance from State Farm and a great immune system.  Cuz he was BAMMING on death’s door just last week.  And this week, he goin’ out for lunch, drankin’ beer, watching his stories from Liv’s bed and chillin’.  He got well QUICK.  I ain’t neva seent nobody have a complete recovery that damn quick.

Quinn figga’d out (a little too late) that the attorney that was s’posed to be helping them with the rape case was actually NOT the attorney but B613.  Bay Bay…ERRYBODY in B613.  I had to check my own damn drivers license and IDs to make sure I ain’t B613.  They done recruited all kindsa foke.  The former attorney now B613 agent went back to Liv’s apartment and caught Huck slippin’.  Huck let him in and promptly caught a needle to the neck.  Russell was untied and rescued.  By the time Liv nem got back, Russell was gone with a hole in his patella (they coulda at least given him matchin’ holes in case he wanted to wear piercings!).  When will they learn that they cannot win against that crazy arse Rowan Pope?

And we finally discovered who Foxtail is – Mellie Mel!  Daddy Pope greeted her in that final scene.  That damn Daddy Pope.  Don’t care what he do, who he kill, how many steaks he cook and eat up, how many agents he gotta recruit or throw in the hole.  And then they showed a clip of the finale and I got my whole life and somebody else’s!  Bay Bay – they showed Mama Pope watchin’ basic cable with no remote…they showed Daddy Pope smilin’…showed Liv behind bars….it was all too much!  But I will be right here..with wine in hand (and hoping for good weather!) next week…. 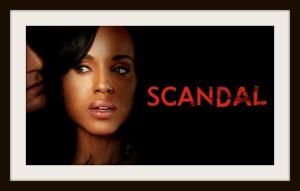