Today, I took my second trip there by way of the Black Panther movie.  Let me just say that I don’t usually watch superhero movies even though I loved/read comic books back in the day.  I did always like Wonder Woman on television and Christopher Reeves as Superman.  Superheros are so different now though.  Wonder Woman was fighting criminals on a budget–they gave her an invisible plane and a gold rope (lasso).  Oh and wrist cuffs that could block bullets supposedly.  Now superheros got all kinds of gadgets and whatnots, but I digress.

Black Panther was sooo good, Y’all.  I tried not to talk about it because I realize not everyone has seen it but it’s been two weeks now right?  If you haven’t seen it now, it’s because you have no friends apparently and nobody likes you.  I kept trying to figure out what I would say that hasn’t been said because there was just so much, so many themes, and I don’t want this review to be too long.

What did I really like?  I loved that the women were portrayed as fierce warriors whose beauty didn’t lie in weaves and wigs.  How freeing must that have been?  I loved some of the lines in the movie especially a) “Stand up ….you’re a king” and b) Bury me in the ocean where my ancestors jumped from slave ships because they knew death was better than bondage”.  Powerful.  That first line is something I’m going to start saying to my child.  The second line, while powerful, wouldn’t have been something I would have said.  I woulda been like “Cuz can you save me with some of that vibranium?”

Which leads me to a discussion about Eric Killmonger, clearly the main villain in this movie when I thought it was Klaue.  It was apparent all Killmonger cared about was killing, getting to Wakanda, avenging his father’s death and becoming King.  He grew up listening to his father (Prince N’Jobu) speak of this magical nation, his home and hoping one day to go and be welcomed by his family.  That never happened because the King (T’Chaka) killed N’Jobu (also King T’Chaka’s brother) after N’Jobu tried to kill James.  James had been sent as a spy and had told the King that N’Jobu worked with Klaue to steal the country’s vibranium.  N’Jobu saw that Black people in the U.S. were oppressed with no hope and wanted to arm them with vibranium weapons.  A young Killmonger would later discover his father dead with panther claws to his chest.

Killmonger graduated from MIT, joined the special forces, and did tours in Iraq and Afghanistan, racking up kills along the way.  He had been forced to work with Klaue, but turned on him when Klaue referred to Wakandans as savages and said that they would never accept him because he was an outsider.  Killmonger even killed his little lady friend.  He then took Klaue’s body to the Wakandans because surely they would have to love and accept him if he brought them the man who took out their king, right?

And I think that was one of the underlying themes of the movie that resonated most with me.  Killmonger was a product of his environment – abandoned by his dad (death) and an entire country.  His country.  He probably never felt good enough…..and as result, he wanted to be the best at everything.  But it still wasn’t enough.  Which is why he wanted to be King.  He wanted love and acceptance from Wakanda, even though the Wakandans didn’t view him as one of them.  He wanted to avenge his father’s death because he probably felt like Klaue never would have got him if N’Jobu was around.  And not only did King T’Chaka kill his dad – he abandoned Killmonger.  Left him in the United States and never spoke of him again.  Killmonger was lost…forgotten.

All that powered Killmonger when he challenged King T’Challa and won.  He threw him over the waterfall, not even allowing for a proper burial, and then told them to burn the garden of the heart-shaped herb so no other kings would come after him.  He clearly was not capable of love because he choked out a female elder, later killed one of the Dorae soldiers, and was thisclose to killing T’Challa’s sister (can we talk about how she stole scenes with her comedic timing?  I hollered when she called Everett Ross “colonizer”).

Not saying Killmonger was right, but I understand.  It didn’t help that “he” was fine in this movie.  When he threw Black Panther over that cliff, I thought oh well, you gotta go some time.  I was ready to go through the screen to be the new Queen til I realized women didn’t fare to well in Killmonger’s world.

That said, the movie was AMAZING.  Really good to see a Black superhero leading a Black country that was so advanced technologically.  Good to see Black women so powerful.  Good to see so many themes – praise the ancestors because we stand on their shoulders; don’t turn a blind eye to your fellow man when you can help them; if you are doing well but your brother is not, you really are not doing well; being abandoned, lost and forgotten hurts; true patriotism is about putting the country first, over the man; and hiding behind a wall may keep you safe, but it also keeps you cut off from the rest of the world and the good things that may lie there. 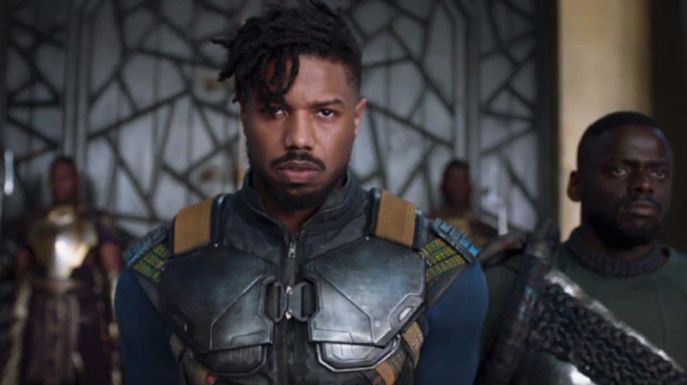